Are You Sitting Comfortably?

Jill Glenn meets Helen Brister, for whom the answer to the question is a resounding 'yes'... 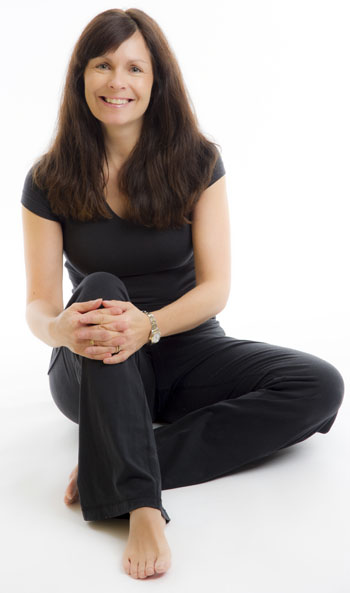 MY USUAL INTERVIEW POSTURE (leaning forward, chin propped up by one elbow resting on the table, body twisted to enable frantic note-taking by other hand while still maintaining eye contact) doesn't really seem appropriate today. There's nowhere to lean, for a start; we're seated on a comfortable sofa with no hard surface for resting purposes anywhere in sight. I slump awkwardly, trying to position myself so that I can both write and remain connected with my interviewee, Helen Brister, almost opposite me at the other end of the curved sofa – but that doesn't seem right either, because Helen is sitting perfectly straight, her legs uncrossed, without any evidence of difficulty or discomfort.

As we're here to discuss her exercise programme, Stop Back and Hip Pain, the promotional material for which features Helen herself looking supple and serene, this shouldn't surprise me – although the experience is certainly making me feel less than perfectly formed. I admit as much, and Helen laughs – very nicely – in recognition of my discomfiture. She probably has this effect on all her friends and contacts. "It wasn't always like this," she points out, adding, "but I'm so aware that I don't build up tension now... I sit in the chair... just perfectly relaxed."

It's an enviable skill, but it has been hard won.

Over-stretching on a weights machine in the gym in 2000, a few months after her daughter was born, Helen strained the iliolumbar ligament; her sacroiliac area was always weak as a result – "I could never put it right" – and the problem was compounded by a skiing injury that just refused to go away. She moved less and less, trying to compensate for the pain, and spent years in discomfort, her torso twisted with one hip higher than the other. "It's amazing how we can look in the mirror and not notice," she says.

There was always muscle spasm in her buttock thereafter, too: as the body tried to protect the ligaments, she suggests, adding "I became programmed to hold that in."

Of course, she sought medical advice, beginning with her GP and then moving on to a range of other therapists (and a selection of diagnoses, including sciatica, bursitis and a bulging disc). She tried Yoga and Pilates, but with little success, realising later: "if your pelvis is twisted, these things are going to hurt."

Her opinion of the various therapists she consulted is not flattering – "some are atrocious" – and solutions all turned out to be temporary. She's a firm believer, now, in the power of taking control of your life and health – but it took seven years of pain and ricocheting between different 'experts' before the lightbulb moment. Lying on the floor, in search of relief from the discomfort, she started picturing her hip moving upwards... and it did. "It was all mind-led," she recalls, "and the tiniest of movements," but she could feel the difference, and started to repeat this very simple procedure each day. "I tapped into my nervous system... I just stopped holding the tension, the muscle spasm disappeared. I was even walking in a more balanced way."

She began to incorporate breathing in time with the movement, and found that she was "engaging the core naturally." Won over – who wouldn't be? – by the freshness of the mobility she'd regained, she undertook reading and researchto develop what she calls her Total Mind and Body System. She's taught herself about anatomy, about biomechanics, about muscle function, but she's keen not to overcomplicate the scenario. Her programme contains elements of Tai Chi and Yoga, and has something of the Alexander Technique about it too. It also bears a resemblance to the little-known Feldenkrais Method, a movement awareness system that improves both posture and coordination, although the two incorporate breathing in different ways. Essentially, though, the Total Mind and Body System simply grew out of Helen's own, almost instinctive, approach to the integration of physical and mental health, and her belief that even the smallest of movement can free up energy within the body.

The Stop Back and Hip Pain two cd set features a combination of exercise routines – one for the pelvis, for example; one for the hips and shoulders; two for the spine – to be rotated on a regular basis. The programme is easy – but not easy. It requires you to make an investment of time, say 20 minutes a day ("It's not much, out of 24 hours," she says drily, as I wonder where I might find that hole in my schedule on a regular basis), and to trust in it for perhaps three or four weeks before you begin to see a return. It's about focusing mind and body together to speed up the healing process – and you have to buy into the power of now. "I had to practice being in the present moment," she recalls. "The first time I was on the floor I couldn't focus. I lasted 30 seconds." Now it comes easily and connects to a deeper self:

"My movement is meditation," she tells me. Helen subscribes to the view that emotional pain manifests itself in the body, and that many of us have no actual awareness of how uncomfortable we are. "Mind and body are one," she says. "When you're thinking, you hold tension in the torso." Her goal – and her own personal achievement – is a "calm mind in a calm body".

A whiplash injury in 2011 set her back, but she upped her commitment to her routine from thrice-weekly maintenance to every day for another six months. "I lay on the floor, just focusing, and thinking 'heal me', and I could feel my body realigning..." While both instructions and cd cover bear the caveat 'although this worked for me there is no guarantee it will work for you...' plus the standard 'as with all exercise routines you should consult your physician before commencing', it's evident from conversation that Helen is confident that anyone can benefit from her regime.

Her husband, Rob, for example, had broken his pelvis in a motorbike accident as a young man, and didn't have detailed movement in his lower back. Once she'd sorted out her own aches and pains, she set about attending to his, while also formulating a plan to share her routines with a community beyond friends and family. It took her two years to get the format for the cd right and Rob was her guinea pig throughout that time.

He regained all the movement that he had lost – "his body quickly picked up" – although she's frustrated that he no longer keeps it up.

Born in Wandsworth, Helen now lives with Rob and daughter Holly, 13, in Chipperfield, near Kings Langley. She's 49, but feels better than she did in her twenties; she's even, as a result of her regime, 3cm taller. "I was unhappy at 40, but now I'm looking forward to life," she says. She sets high targets for herself – I sense a driven woman – but has now learned how to juggle her many commitments. "I make a list of the absolute priorities... and then I do whatever I fancy."

An accountant by training, for the last ten years she has been running her own property investment company, although she has recently been scaling down her involvement in order to free up time to promote the Stop Back and Hip Pain cd set, and to work on a campaign to limit the weight that children are carrying in their schoolbags. "It's about protecting our children's backs and reducing the stress in their lives," she explains with passion. "They can be carrying up to fifty per cent of their body weight. It should be ten, maximum."

Helen's discoveries about how to heal her body changed her life, naturally, and continue to do so. "I became pain-free in 2008," she says, in the manner in which one might say, "I became a Christian," or "I became a vegetarian"...

...and she enthuses about just how transformational this whole experience has been. She's developed a spiritual side and "connected into the universe". She speaks about acceptance, about changing negative thoughts into positive ones, about taking ownership of situations. She has "a new fascination with angels, a feeling of absolute euphoria."

I wouldn't be honest if I didn't say that some of Helen's philosophy sounds, just occasionally, a little screwy, and that her evangelical fervour can be overpowering. But she is the one who can move and stand and sit with ease – and I am the one who is creaking and groaning again like a woman twice my age ...

I couldn't stand the agony, so I started my own plan... 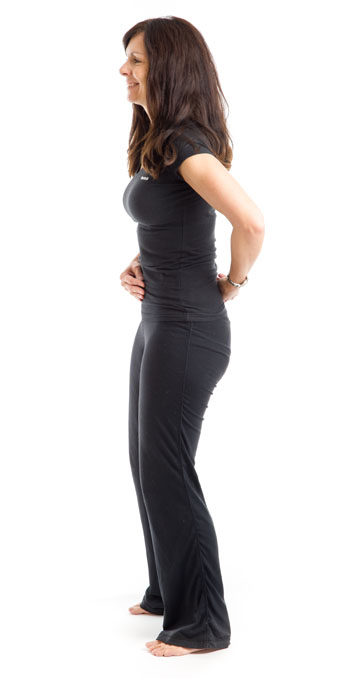 All my daughter Holly, seven, wanted to do was go to the park.

"Sorry, sweetheart", I sighed, grimacing as I sat back down on the sofa. "Mummy's in pain and can't go out today."

I was only 44, yet I felt like I was trapped in the body of a much older woman.

Holly's face fell - I felt terrible.  The thing is, I could barely do anything on my own.  It was all because of my back!

My problems had started seven years before.  I'd een trying to shift my baby blubber on a weight machine at the gym when I'd felt a sudden, sharp pull.

Later, no matter which way I'd turned, it hurt.

"Go to see a chiropractor." my hubby Robert, 44, insisted.

And he was right.  "It looks like you've pulled a ligament," the chiropractor explained.  "All you can do is rest."

But even with painkillers and rest, the pain hadn't eased.  Instead, it's gradually got worse.

Now, the constant strain had led to my pelvis twisting and meant I had one hip higher than the other.

The thing that bothered me the most though, was the fact that I was missing out on playing with my daughter.

"I can't stand this anymore," I sighed to Robert later that night.  "I've tried yoga classes, sport massages, the whole lot....".  "Perhaps I should try my own exercises, "I said.

"You might as well - what have you got to lose," he replied.

So, taking matters into my own hands, I started shortening normal exercises and combining them with different yoga and pilates movements.

Soon, I'd discovered, that if I pictured the body part being used, I was able to connect both body and mind, which really improved my movement.

"I feel like a new woman," I told Robert after a couple of weeks.

Three months on, the pain in my back had gone.  I could do loads more with Holly, and even managed to swim with dolphins on holiday in Mexico.

Over the next few years, I started writing my techniques down and began to think about how my moves could help others, too.

Last year, I launched my own website and audio CD.  Already, I've sold 150 copies, and so far the feedback has been amazing.

I hope to expand my exercises to schools to help teachers and pupils with their back problems.  I've definitely bounced back now!